How have you been? Rainy season has come in Tokyo.

In such a rainy season in Japan, the LIME working group has been blessed with brisk news for MGD patients who show resistance to conventional treatment. 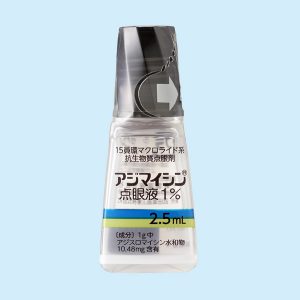 Azithromycin is a broad-spectrum macrolide antibiotic with low-level anti-inflammatory properties that penetrates the conjunctiva and eyelids and has a long post-antibiotic effect. More than 15 articles showed the efficacy of 1% Azithromycin eyedrops for MGD patients (posterior blepharitis). Azithromycin antibiotics have also been shown to have anti-inflammatory properties. Moreover, Sullivan et al. published the article as below. They proved azithromycin stimulated meibum secretion directly through meibomian gland epithelial cells.

This drug has been approved for conjunctivitis in the US FDA in 2007, and continues to be announced the effectiveness for MGD despite being an off-label, and in fact, I have also purchased 5 eye drops for 100 US dollars per bottle for personal import in 2010. We have have experience in having prescribed to patients of MGD who had difficulty in treatment at that time.

It is a very effective eye drop and good sharpness, and I myself clearly remember the effect. The usage is also quite distinctive, twice daily for 2 days and then once daily for 12 days.

I’d like to prescribe patients with MGD (both obstructive and seborrheic MGD) whose therapeutic effect has not been obtained by conventional treatment, as well as, of course, fresh cases of anterior and posterior blepharitis.

We are currently preparing to set up a new page on “the close relationship between blepharitis and MGD” on the LIME website. We will be able to release it this month, so we will notify you once it is released.

It is almost time to prescribe azithromycin eye drops to many patients in need in Japan. Azimycin eye drop will be released in September.