In an eye with MGD, lipids secreted by the meibomian glands have a higher melting point, so they solidify. A warm compress raises the temperature of the eyelids to the melting point of lipids, so solidified secretions melt. This increases the secretion of those lipids. 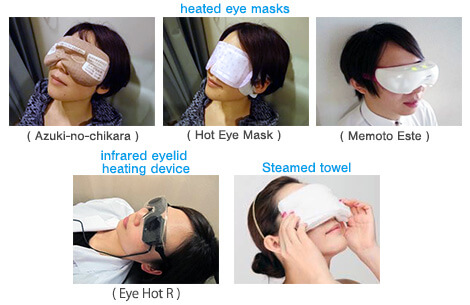 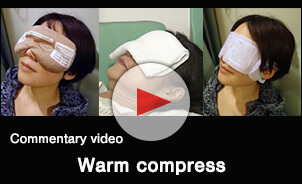 In addition, pressure on the eyelids physically facilitates the secretion of lipids. Medical instruments such as the Yoshitomi, Dokkyo, and Arita expressor forceps (Fig. 2) are used to place pressure on the eyelids. Periodically expressing lipids from the meibomian glands, while causing little pain, should be an effective treatment.

Lid hygiene should prove effective when performed in conjunction with use of a warm compress.

In the past, the recommended technique was to apply baby shampoo to a cotton swab and wipe the meibomian gland orifices clean. Now, however, cleaning swabs for the meibomian glands and eyelid cleansers are commercially available. These new techniques cause less irritation of the eye compared to the conventional approach. The best practice is to routinely perform lid hygiene twice a day, once in the morning and once at light, much like cleaning one’s face.

Fig. 3: A case where only lid hygiene was performed for 2 weeks and MGD was alleviated 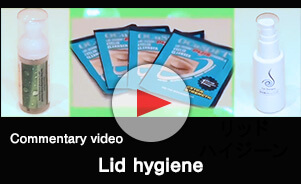 Application of a small dose of eye ointment is effective, but if water is absent an oil film will not be formed, so ointment should be applied while also instilling artificial tears.2

Oil-based eyedrops are primarily OTC medications at home and abroad and can be purchased at a pharmacy.

Treatments for dry eye (e.g. artificial tears or hyaluronic acid) are effective treatments for the lipid layer that alleviate subjective and objective symptoms. Recently, a study has reported that the meibomian glands have P2Y2 receptors.3 In the initial stages of MGD when morphological changes have yet to manifest, diquafosol eyedrops can stimulate lipid secretion.

Rebamipide has anti-inflammatory action and anti-oxidant action. Presentations have indicated that instillation of a rebamipide suspension is effective in treating MGD, so this drug may be a future treatment for MGD.

A low dose of a tetracycline or a macrolide can be taken for a prolonged period in order to substantially eliminate bacteria from the lid margins and meibomian glands. These antibiotics readily penetrate the tissue of the meibomian glands.

Tetracyclines inhibit the activity of lipase produced by bacteria and macrolides should have additional anti-inflammatory action.

A study has indicated that consuming foods and supplements with a large amount of omega-3 fatty acids is effective in treating MGD 5, but detailed studies have yet to be conducted.

Guide on diagnosis and treatment
of MGD

Guide on diagnosis and treatment of MGD