The definition, classification, pathophysiology, and management of MGD

Meibomian gland dysfunction (MGD) is a chronic, diffuse abnormality of the meibomian glands, commonly characterized by terminal duct obstruction and/or qualitative/quantitative changes in the glandular secretion. This may result in alteration of the tear film, symptoms of eye irritation, clinically apparent inflammation, and ocular surface disease.

Fig .1 The new classification system proposed by the International Workshop on MGD distinguishes among the subgroups of MGD on the basis of the level of secretions and further subdivides those categories by potential consequences and manifestations. On the basis of these proposed classifications, obstructive MGD is the most pervasive.

Under the broad category term, meibomian gland dysfunction, MGD is further classified into two major categories based on meibomian gland secretion (Fig. 1): low-delivery and high-delivery states. Low-delivery states are further classified as hyposecretory (meibomian sicca) and obstructive, with cicatricial and noncicatricial subcategories. Primary causes are listed under each category and refer to conditions for which there is no discernible underlying cause or etiology. 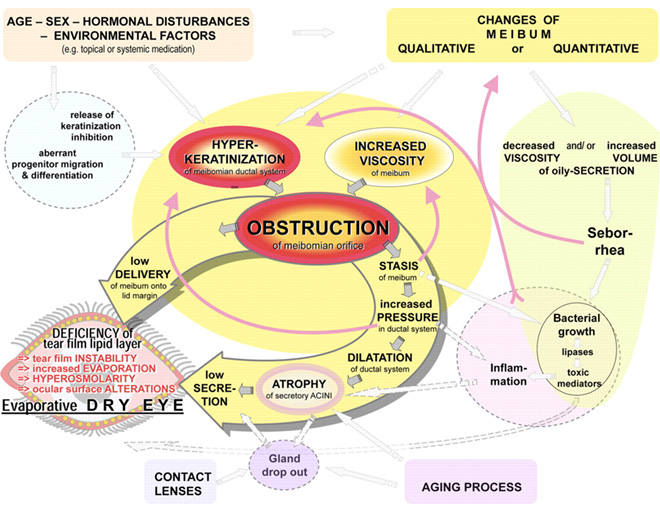 Meibomian gland dysfunction is caused primarily by terminal duct obstruction with thickened opaque meibum containing keratinized cell material. The obstruction, in turn, is due to hyperkeratinization of the ductal epithelium and increased meibum viscosity (Fig. 2). The obstructive process is influenced by endogenous factors, such as age, sex, and hormonal disturbances, as well as by exogenous factors such as topical medication. The obstruction may lead to intraglandular cystic dilatation, meibocyte atrophy, gland dropout, and low secretion, effects that do not typically involve inflammatory cells. The outcome of MGD is a reduced availability of meibum to the lid margin and tear film. The consequence of insufficient lipids may be increased evaporation, hyperosmolarity and instability of the tear film, increased bacterial growth on the lid margin, evaporative dry eye, and ocular surface inflammation and damage.

Although the etiology of MGD may differ from that of aqueous-deficient dry eye disease (which is due to insufficient lacrimal gland production), the two conditions share many clinical features, including symptoms of ocular surface irritation and visual fluctuation, altered tear film stability, and potential ocular surface compromise. When the severity of MGD is of a sufficient degree, it may give rise to the second major subtype of dry eye disease, evaporative dry eye. These subtypes are not mutually exclusive.

Epidemiologic investigation of MGD has been limited because there is no consensus regarding the definition nor is there a standardized clinical assessment that characterizes this disease. There is a paucity of evidence on the natural history of MGD, the actual processes that cause it, or when symptoms actually develop in the disease process. It is also unclear whether MGD symptoms begin at the onset of or after meibomian gland damage and altered meibum delivery or instead arise from subsequent damage to other ocular surface tissues.

Table1 :Population-Based Studies Providing Estimates of the Prevalence of MGD

Several ophthalmic, systemic, and medication-related factors may coexist with, or plausibly contribute to, the pathogenesis of MGD. Ophthalmic factors may include anterior blepharitis, contact lens wear, Demodex folliculorum, and dry eye disease. Systemic factors that may promote MGD include, among others, androgen deficiency, menopause, aging, Sjögren’s syndrome, cholesterol levels, psoriasis, atopy, rosacea, hypertension, and benign prostatic hyperplasia (BPH). Medications associated with the pathogenesis of MGD include antiandrogens, medications used to treat BPH, postmenopausal hormone therapy (e.g., estrogens and progestins), antihistamines, antidepressants, and retinoids. The ω-3 fatty acids may be protective.
In summary, MGD appears to be a prevalent problem, with detriments that are potentially damaging to well-being. Nonetheless, even basic information regarding its prevalence, demographic and geographic distributions, risk factors, and impact on ocular health and quality of life are only beginning to emerge. The same was said of dry eye disease more than a decade ago, and since that time, research efforts have grown exponentially. We are confident that the time has now come to embark on the systematic study of MGD as well. It is through such efforts that a better understanding of the disease will be gained, and strategies for prevention and treatment will begin to be developed.

Table 2 reflects an evidence-based approach to the management of MGD. At each treatment level, lack of response to therapy moves treatment to the next level. A ± sign means that the evidence to support the use of the treatment at that level is limited or emerging, thus its use should be based on clinical judgment. A + sign indicates that the treatment is supported by the evidence at that stage of disease. The quality of expressed meibum and meibum expressibility are key features in the clinical assessment of MGD.
As outlined in Table 2, meibum quality is assessed in each of eight glands of the central third of the lower lid, and meibum expressibility is assessed in the five glands in the lower or upper lid. The numerical staining scores refer to a summed score of staining of the exposed cornea and conjunctiva. Note that corneal staining with topically instilled fluorescein can occur in normal subjects on a sporadic basis, therefore pathologic staining should be identified as repeatedly observed staining of the same or adjacent portions of the cornea. With every systemic medication, systemic side effects have to be considered.
With the treatment algorithm in Table 2 in mind, the phototoxicity caused by systemic tetracycline derivatives and the anticoagulant effects of essential fatty acids (EFAs) are of specific concern. EFAs are nutritional supplements that have received much attention, but with only one published clinical study so far supporting their efficacy in MGD. This is also true of the use of sex hormones, for which there is no published clinical trial regarding efficacy, and there is no licensed product available. Hence, the panel agreed not to assign this potential treatment modality to a grade of disease. The risks of prolonged topical corticosteroid therapy (e.g., induction of cataract and elevated intraocular pressure) are well known. Consequently, the use of such medications should be reserved for the treatment of acute exacerbations in MGD and are not recommended for long-term therapy. Regular monitoring of intraocular pressure is mandatory with the use of topical corticosteroids.
Management of plus disease conditions should follow the standard of care and is not limited to the treatments listed in Table 2.

What are the meibomian glands?